SAR is an active sensor that transmits pulses and listens for echoes, called backscatter. The backscatter is recorded in both phase and amplitude. The phase is used to determine the distance from the sensor to a target, and amplitude indicates the amount of the sent signal that returns to the sensor. Amplitude measurements provide information about the roughness, geometry, wetness, and dielectric constant of that target, while phase measurements are used for SAR interferometry.

At the most fundamental level, SAR transmits an encoded burst, called a chirp, of electro-magnetic energy (Figure 1) and then listens for the return signal, called echoes. The wavelength of this chirp is in the centimeter range, with X-band (~3 cm), C-band (~6 cm), and L-band (~23 cm) all in common use.

Figure 1: The spectrum of electromagnetic radiation. SAR is imaged using microwave wavelengths. The microwave range extends from about 1 mm to 1 m in wavelength, with most radar applications using bands within the 3 mm to 30 cm range. 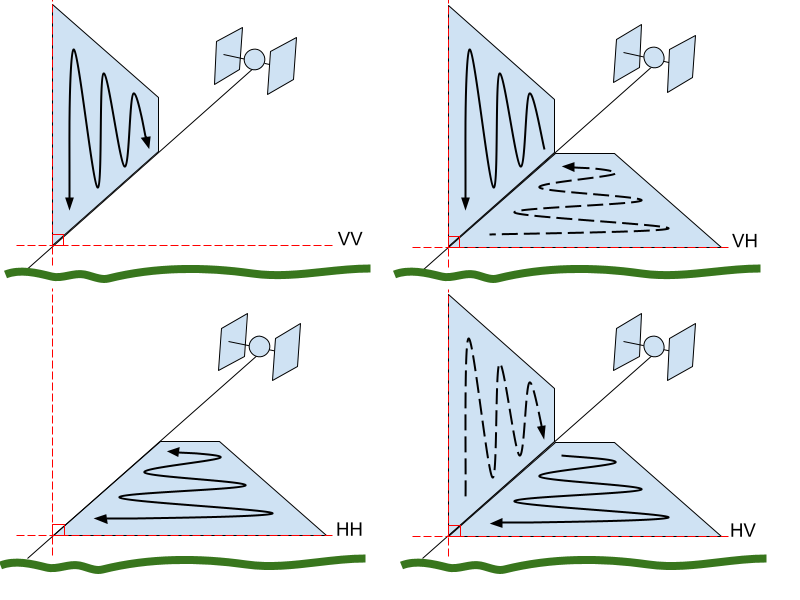 Polarimetry is an emerging field of SAR processing which is used in a number of applications such as measuring vegetation properties and changes of vegetation over time. Additional applications include oceanography, geology, and disaster response.

Many factors influence the backscatter received by the SAR sensor. The wavelength used by the SAR influences the signal's penetration, and, thus, what is being imaged. Surface roughness will modulate the backscatter returns from nothing up to a strong return, decreasing or increasing the brightness of the resulting pixel. Scattering mechanisms like volume scattering or double bounce can strongly influence the brightness of the SAR image as well, sometimes resulting in total saturation by the received signal. 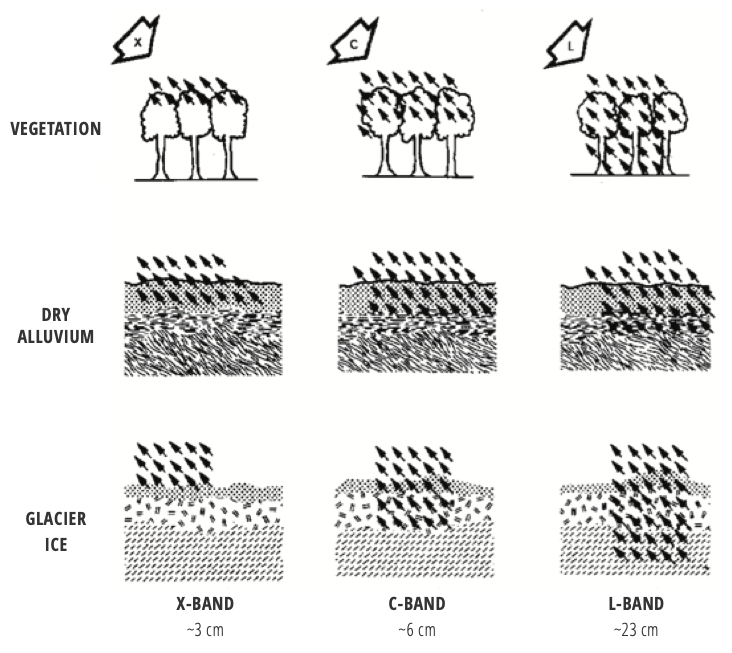 Figure 3: Effects of the SAR band on penetration of surfaces. The longer the wavelength, the deeper the penetration through most land types. Credit: The SAR Handbook

The strength of the return, or backscatter, is partially based upon relative roughness of the surface imaged. The smoother the surface, the more reflection away from the sensor, while rough surfaces give a much stronger return towards the imaging platform. As can be seen in Figure 4, if the height of the surface's roughness is less than 1/32 of the wavelength, mostly specular reflection occurs. If the height of the surface's roughness is greater than 1/2 the wavelength used, the echoes are scattered in all directions, giving a strong return back to the sensor.

Figure 5: Scattering mechanisms. Rough surfaces give bright returns due to the wide scattering. Vegetated surfaces cause volumetric scattering, which gives a darker return to the imaging platform. Double bounce returns, found mostly in urban areas, give the brightest return, as the majority of the energy is re-directed back towards the sensor. Credit: The SAR Handbook

The resolution of Sentinel-1 SAR images is roughly 10 m. This means that a square of 10 meters on the ground is represented by a single pixel in the SAR image. The relative roughness of this patch of ground compared to the wavelength used will affect the backscatter strength (see Figure 4). However, there are additional types of bounce mechanisms beyond specular and diffuse, as shown in Figure 5. In vegetation, volumetric scattering occurs when signals bounce around inside the vegetation imaged. The double bounce mechanism which occurs in urban areas and is exploited by corner reflectors, causes chirp to be reflected directly back to the sensor, causing a very strong backscatter. Double bounce returns are so strong in some places that they cause over saturation of the sensor, resulting in visible sidelobes. These sidelobes are evidenced by bright crosses surrounding the double bounce target.

SAR backscatter are recorded in both return strength and phase. Each pixel in a single-look complex SAR image represents these values as an imaginary number (I,Q). To create the visible images we are used to looking at, the SAR image is detected. This process calculates the square root of the sum of the squares of the I and Q values found in an SLC image, creating a so called intensity image. This image is real valued, and, when calibrated, gives the absolute backscatter of the surface imaged. Detected images can be stored using several different scales, including power, amplitude, and dB. Note the default scale of Sentinel-1 RTC products from HyP3 is power. However, in some cases, it may be desirable to convert the actual pixel values to a different scale. Two other scales commonly used for SAR data are amplitude and dB.

The values in this scale are generally very close to zero, so the dynamic range of the SAR image can be easily skewed by a few bright scatterers in the image. Power scale is appropriate for statistical analysis of the SAR dataset, but may not always be the best option for data visualization.

When viewing a SAR image in power scale in a GIS environment, it may appear mostly or all black, and you may need to adjust the stretch to see features in the image. Often applying a stretch of 2 standard deviations, or setting the Min-Max stretch values to 0 and 0.3, will greatly improve the appearance of the image. You can adjust the stretch as desired to display your image to full advantage. Be aware that this does not change the actual pixel values.

The dB scale is calculated by multiplying 10 times the Log10 of the power scale values. This scale brightens the pixels, allowing for better differentiation among very dark pixels. When identifying water on the landscape, this is often a good scale to use; the water pixels generally remain very dark, while the terrestrial pixels are even brighter (see Identifying Surface Water).

This scale is not always the best choice for general visualization of SAR products, as it can give a washed-out appearance, and because it is in a log scale, it is not appropriate for all types of statistical analyses.

There are a number of distortions inherent to SAR data due to the side-looking nature of the sensor, and these impacts will be more prevalent in areas with rugged terrain. The process of radiometric terrain correction addresses the geometric distortions that lead to geolocation errors in terrain features, and also normalizes the backscatter values based on the actual area contributing returns. This process generates an image that aligns well with other geospatial data and is suitable for GIS applications or time-series analysis.

The key distortions present in SAR images are foreshortening, layover and shadow (Figure 6).

Figure 6: Distortions induced by side-looking SAR. Ground points a, b, c are ‘seen’ by radar as points a’, b’, c’ in the slant range. Credit: Franz J. Meyer

In the case of foreshortening, the backscatter from the front side of the mountain is compressed, with returns from a large area arriving back to the sensor at about the same time. This results in the front slope being displayed as a narrow, bright band.

Another condition that results in missing data is radar shadow. In this case, the angle of the back slope is such that the sensor can not image it at all. These areas with steep back slopes offer no information to the SAR sensor.

When RTC is performed, foreshortened areas are corrected based on the DEM. Areas impacted by layover or shadow, however, do not actually have data returns to correct. In this case, the pixels in the resulting RTC image will have a value of No Data. We do not interpolate missing data; users who would like to fill holes with estimated values will need to do so as appropriate for their particular application.

In most cases, the patch of ground illuminated by the SAR transmitter will not be homogeneous. Instead it will be comprised of many different types of individual scatterers. The scatterers may interfere with each other either strengthening the return or weakening it. This creates a grainy (salt & pepper) appearance in SAR imagery. This a result of the nature of SAR and, thus, occurs in all SAR scenes. Speckle in SAR images can be mitigated by multi-looking, which, in effect, uses averaging to smooth out the image, resulting in a more homogeneous appearance at the expense of resolution.