Digital Elevation Models are required when processing SAR data to higher-level products, such as the Radiometric Terrain Correction (RTC) and Interferometric SAR (InSAR) products available On Demand from ASF.

ASF uses DEMs that are publicly available and have wide-ranging coverage. In the past, ASF maintained a collection of DEMs that were pre-processed as appropriate for SAR workflows, and applied a preference hierarchy so that the best available DEM in any given area would be automatically selected for processing.

Users still have the option to use the legacy DEMs when processing RTC jobs On Demand in Vertex and when using the API or SDK, but we recommend using the Copernicus DEM whenever possible.

When processing InSAR On Demand products, the Copernicus DEM is the only option available. The legacy DEMs are no longer supported for InSAR processing.

Table 1 summarizes ASF's DEM sources. Note that in all cases the DEM is reprojected to the UTM Zone (WGS84) appropriate for the granule location, and a geoid correction is applied before being used for processing. For RTC processing, the DEM is resampled to the pixel spacing of the output product. The Copernicus DEM is the only option available for InSAR processing, and the DEM is resampled to twice the pixel spacing of the output InSAR product (160 m for 20x4 looks, 80 m for 10x2 looks).

Table 1: DEMs used for On Demand processing. For RTC products, the Copernicus 30 m DEM is the default, while the other four DEMs are only used if the legacy option is invoked. The Copernicus DEM is the only option available when processing InSAR products.

When ordering On-Demand products, you can choose to include a copy of the DEM used for processing in the output product package. For RTC products, this DEM copy is converted to 16-bit signed integer format, but is otherwise the same as the DEM used in the RTC process. For InSAR products, the DEM copy is output in 32-bit float format, and is upsampled from the DEM resolution used for processing to match the pixel spacing of the output InSAR products.

Note that the height values will differ from the original source DEM in all cases, due to the geoid correction applied to prepare the DEM for use in SAR processing.

The GLO-30 Copernicus DEM provides global coverage (with the current exception of an area covering Armenia and Azerbaijan, see Figure 2) at 30-m pixel spacing. When an On Demand job is requested, we download the required DEM tiles from the Copernicus Digital Elevation Model (DEM) GLO-30 Public dataset available in the Registry of Open Data on AWS, managed by Sinergise. We mosaic the tiles and reproject them to the appropriate UTM Zone for the location of the SAR granule to be processed, resampling them as required for processing. A geoid correction is applied before it is used for On Demand processing.

Figure 1 shows the coverage of the Copernicus DEM GLO-30 Public dataset, and Figure 2 details the land area currently not covered. 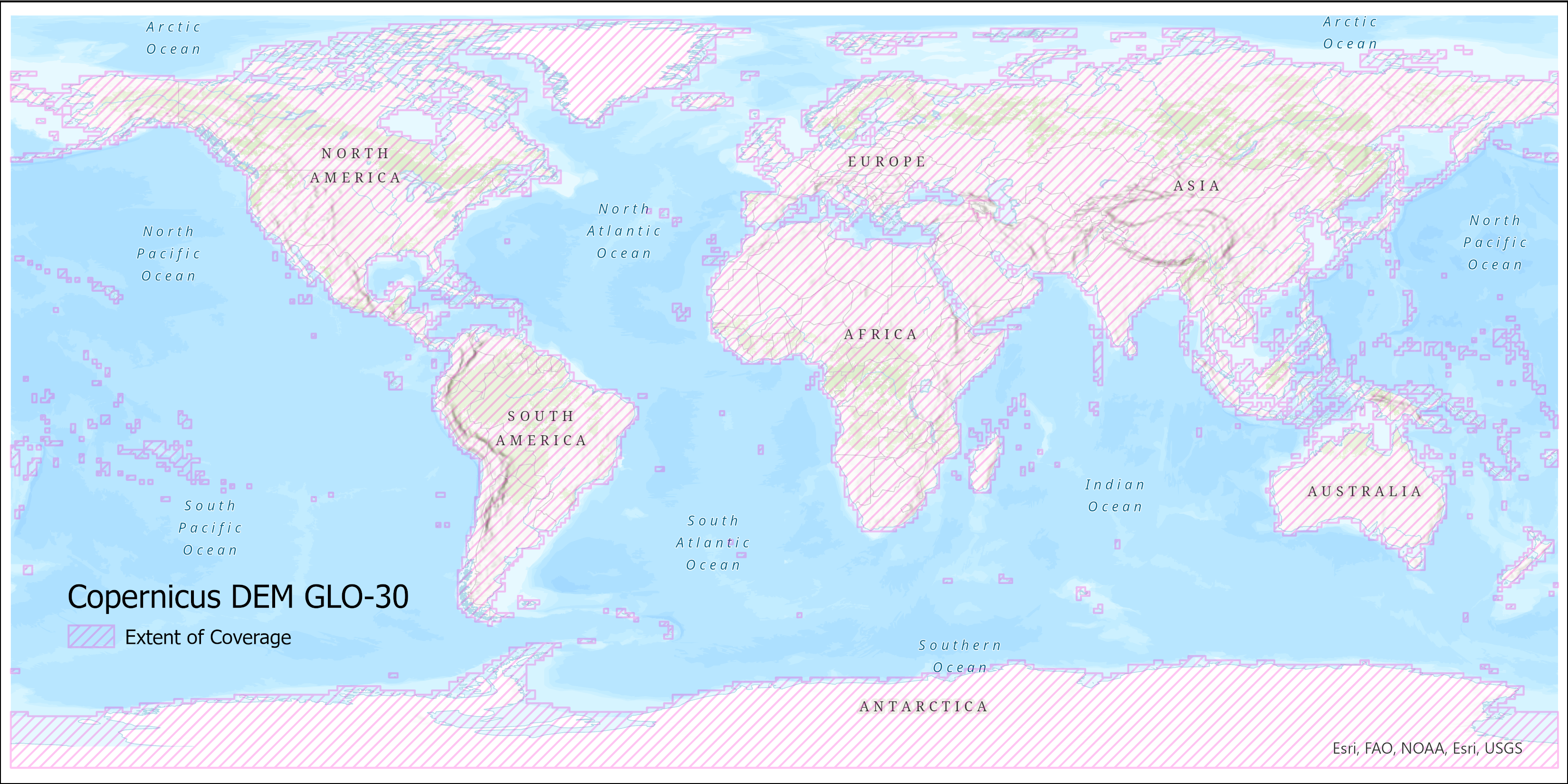 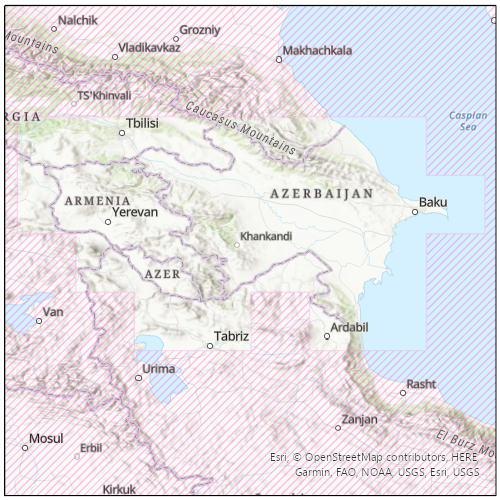 The legacy DEMs were pre-processed by ASF to a consistent raster format (GeoTIFF) from the original source formats: height (*.hgt), ESRI ArcGrid (*.adf), etc. Many of the NASA-provided DEMs were provided as orthometric heights with EGM96 vertical datum. These were converted by ASF to ellipsoid heights using the ASF MapReady tool named geoid_adjust. The pixel reference varied from the center (pixel as point) to a corner (pixel as area). The GAMMA software, used to generate the terrain corrected products, uses pixel as area and adjusts DEM coordinates as needed.

These processed DEM collections are stored by ASF in AWS. When an On Demand job is requested, the best-available DEM covering the SAR granule is selected, and the necessary tiles are reprojected to a mosaic in the UTM Zone appropriate for the granule location.

If legacy DEM processing is selected, one of the following DEMs will be used:

Since more than one DEM may be available in legacy processing, DEMs are selected in priority order as listed in Table 1. DEM coverage of at least 20% from a single DEM source is required for legacy processing to proceed. In no case will the DEM selected be from more than one source; only the single best source of terrain height values is used for a given scene.

Figure 3 shows the coverage of the various legacy DEM sources. 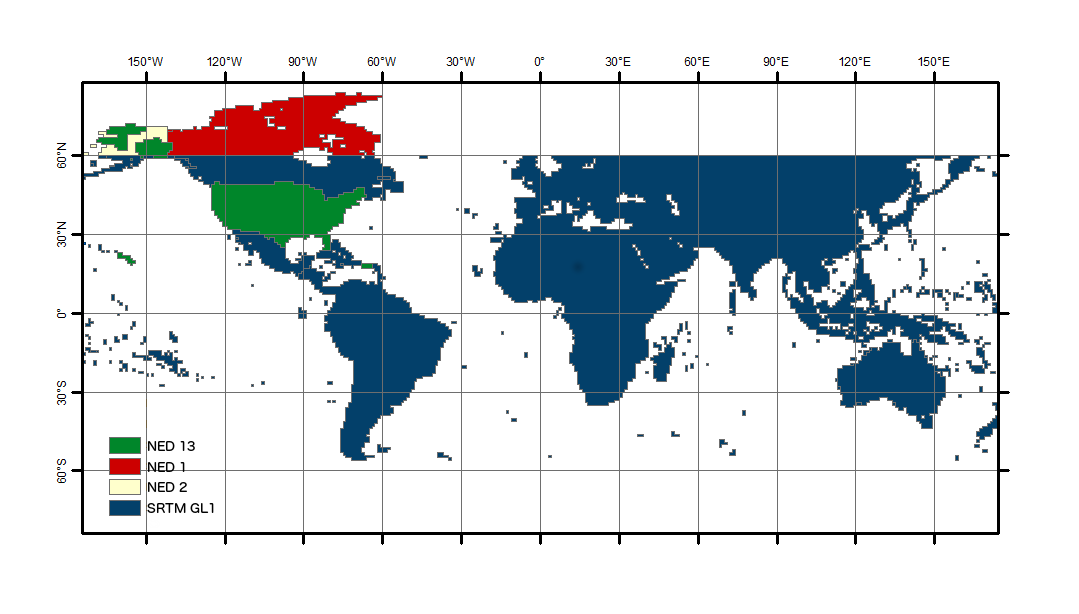 AutoRIFT, a process developed by the NASA MEaSUREs ITS_LIVE project, uses custom Greenland and Antarctica DEMs with 240-m resolution. The DEM, associated process input files, and their details are available on the ITS_LIVE project website.